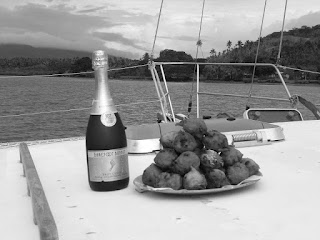 A Merry Christmas and Happy New Year to you all!! Its been a long time since our last blog entry, in fact just over three years, so we will do our best to bring you up to date with all our goings-on! As with most years in 2015 the few months of the cyclone season are not the time to be sailing very far from home and a number of very pleasant snorkeling expeditions a few miles down the road to the Cousteau resort were about as adventurous as it got ! In April we attempted to go for a sail with friends and as we left the mooring half our folding propeller fell off and that little trip was canceled! That same evening we heard the terrible news that our friend Bernard, whose wedding we had attended in 2014, had fallen into the natural hot springs and had received massive burns from the super heated steam. More then 70 % of his skin was affected. He was transported to Suva where regrettably he passed away a few days later. It was a very sad time for the yachting
3 comments
Read more
More posts